LOVE is undeniably the greatest feeling, state of being and gift that we can experience, possess, give and receive.  LOVE is one of the themes that I draw inspiration from when I write a poem or a spoken word piece.  The story that I am about to share with you is a love story which takes place in mid air and I mean that in a literal sense hehe!

When a man proposes to the woman he loves, the woman will always remember how special he made her feel, that moment will always be cherished and it will never be forgotten!  This was the precisely the case for my niece Nia and her partner Kelo. They both live in Sydney, Australia. My niece Nia is Tongan and her partner Kelo is Samoan.  They have been dating for quite some time and they love each other very much. So naturally, marriage was the next step.

Nia and Kelo had planned to a trip to Tonga to spend Christmas 2011 and New Years 2012 there. Without Nia knowing, Kelo had sought the permission from her parents for her hand in marriage prior to their flight to Tonga (Go Kelo!).  He had also organised his marriage proposal plans with the airline staff prior to them boarding the aircraft and so the staff were in on the surprise too.

When their flight reached halfway to Tonga, Kelo received the indication from the flight attendant that this was his moment. Kelo got out of his seat and walked over to the flight attendant (remember this was all planned ahead).  The flight attendant then picked up the PA microphone and called Nia to the front. Puzzled, Nia made her way to the front and the flight attendant handed the PA michrophone over to Kelo.  Nia stood in front of the first class passengers, wondering what was going on.  Kelo spoke into the PA michrophone and informed everyone on board the flight of how much he loves Nia and how special she is to him! Then he turned to Nia and told her how much she means to him.  THE MAN then got down on one knee, pulled out the ring and asked Nia if she would take him as her husband and if she will marry him… *sigh*  Nia stood there crying and everyone on board the plane cheered and clapped for them.  Nia’s answer was of course “YES”.

Their flight arrived in Tonga and the couple were happily engaged.  To Nia’s surprise, awaiting their arrival at the Tonga airport was her Father and her relatives and they were ready to celebrate their happy news! 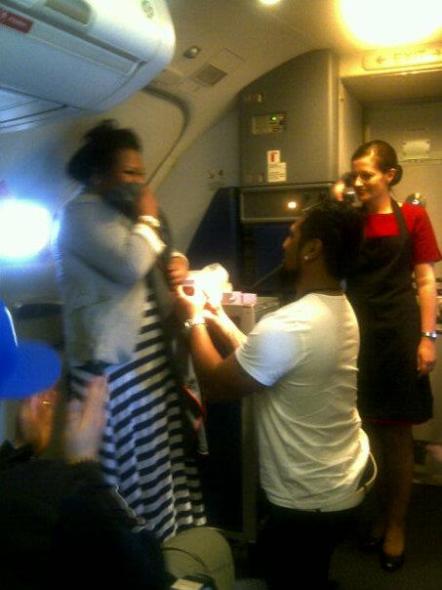 CONGRATULATIONS ONCE AGAIN TO NIA & KELO!  You are truly blessed my beautiful niece with such a good man!  What a classy marriage proposal and such a wonderful way to start 2012.  I’m so happy for you both!