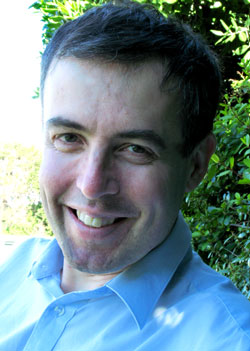 Tim Jones is a New Zealand fiction writer, poet, and editor. He is the author of two collections of short fiction, three collections of poetry, and one novel. He was also co-editor of Voyagers: Science Fiction Poetry from New Zealand (2009) with Mark Pirie. Voyagers won “Best Collected Work” in the 2010 Sir Julius Vogel Awards, and in the same year, he won the NZSA Janet Frame Memorial Award for Literature. His third poetry collection, Men Briefly Explained, was published in late 2011. His story The New Neighbours is included in The Apex Book of World SF 2 (2012).

Jones’ was born in Cleethorpes, Lincolnshire, UK and emigrated to Southland, New Zealand as a young child. Currently, he resides in Wellington, New Zealand. He has a Bachelor of Science from Otago University, Dunedin and a Bacheor of Arts from Victoria University, Wellington.  His short fiction and poetry have appeared in magazines and anthologies in New Zealand, the UK, the USA, Australia, Canada and Vietnam! In addition, he runs a superb blog in which you can contact him on: http://timjonesbooks.blogspot.com

I am deeply honoured that Tim Jones is my guest blogger for this month. I thoroughly enjoyed reading his latest collection of poetry entitled Men Briefly Explained which is thought provoking and witty and I highly recommend it. It is with great pleasure that I share with you all his wonderful write up about his experiences and his literary works in connection to the Pacific Ocean.

Sending many thanks to you Tim Jones for your time and for accepting my invitation. Malo ‘aupito 🙂

The Swells of the Quiet Ocean

I was born in Grimsby, a small city on the east coast of England that owed its existence and its modest fortune almost solely to the fishing grounds of the North Sea, which in the middle years of the 20th century were still rich. (Now, they are exhausted).

But the North Sea soon dives out of this story, because, when I was two, my family set sail from England, bound for a country on the far side of the world which no-one in my family had ever visited. The Orient sailed across the Atlantic, and through the Panama Canal, and into the Pacific. And my story has been bound up with the Pacific Ocean ever since.

In Russian, the Pacific Ocean is called [Russian] or the “quiet ocean”, which is how I refer to it in this poem, where I imagine myself on the ship coming out:

We passed through, to be rocked

on the swells of the quiet ocean,

then a cold shore,

and the half of a world

it would take to say goodbye.

(from “Impertinent to Sailors” in Men Briefly Explained)

I called my first poetry collection Boat People and prefaced it with this quotation:

Nothing but the parochialism of geographers distinguishes the Tasman Sea from the Pacific Ocean – really, the Tasman is just the bit of the Pacific that lies between Aotearoa and Australia. We were the proverbial “ten pound Poms” who came out to Aotearoa on an assisted passage, the idea being that, when we landed in Lyttelton, Dad would have a job waiting for him – this being the early 1960s, the concept that Mum would have a job waiting for her wasn’t entertained.

Unfortunately, when we landed, Dad’s job had gone to someone else. So we scrounged around until Dad got a job as pay clerk to the men building the road across Hasst Pass, thereby connecting Otago and the west Coast. It was the Tasman we went to live beside, its beaches heavy with driftwood washed ashore by storms, its summer skies red with the smoke of Australian bushfires. Many years later, I returned to Haast with a friend. When we stopped the car and got out, we looked in opposite directions:

Forest and sea have had their way

with memory. A few houses — silent,

locked — remain. Between car and beach,

a field of Shetland ponies, already

calling her by name. But I’m

facing inland, bush not far beyond,

across the morning light. Was this

our house, or this, or this now empty field?

For eighteen months, we lived here

while they built the road. I was two, then four.

What I have are barely memories:

my mother at the washing line. My father’s

lifting me onto their knees to ride.

Work done, we drove away, the new highway

across the Main Divide. Now I’m back, reclaiming

what may be reclaimed. The forest

has no answers. The sea lies past the ponies.

But the Pacific was never far away, and Dad’s next job took him onto dangerous waters. He got a job as a Fisheries Inspector in Southland, his ‘patch’ extending from The Nuggets lighthouse on the South Otago coast right round to Milford Sound in Fiordland. He checked paua and toheroa catches onshore, and went out on fishing boats to check that catch limits were being kept to.

The fishing boats went to really dangerous, isolated places like Puysegur Point at the south-western corner of the country. I wasn’t allowed to go on those journeys, but at weekends I would join him for work expeditions to places up and down the coast, just he and I in the Skoda Trekka van that came with the job, so light in the back that Dad had to place a slab of concrete on the floor to stop the van slewing about in the Southland winds. Sometimes (for these were more innocent times) he would leave me playing at one end of the beach while he went to the far end to check that shellfish catch limited were being adhered to. I would play for hours, damming streams, imagining myself the next great hydro engineer. (I no longer imagine myself the next great hydro engineer).

And, even better, from time to time I got to accompany him across the wild waters of Foveaux Strait to Stewart Island, Rakiura of the glowing skies:

… And now the island: crash

davits whining as we walk away.

Men at sea, I take my father’s hand

as we approach the village, houses

hunched against the glowing skies.

The lure of escape, of absorption

into no-time, merely being

and doing. The memory of waves.

The journey back. Hands,

reaching as we near the shore.

(from “Men at Sea” in Men Briefly Explained)

So I spent a lot of time beside the Pacific, or carried just above it in flimsy vessels of metal and glass. I spent very little time in it, because I could not swim – despite many hours of humiliation in school pool and public pool alike, cajoled by instructors variously brisk and encouraging, I still have not learned; I have heavy bones. My natural habitat was the beach, and the little streams that crossed it, with the waves breaking impressively somewhere just beyond the rim of my sunhat:

where the Mataura River

subsides to the sea in oxbow bends

past the golf course

east of the headlands

and the perfect place for us.

We’ve been coming here for years

Dad and I, and now my sister too

to the end of the gravel road

to Two Creek Beach and the sea.

that cross the sandy beach

then a narrow lip of rock

before giving their all to the waves.

Here’s what we do: Dad skims stones

I dam and divert the streams

who knows what younger sisters do

while a dam is being made?

We crawl towards the sunset

on the lonely south coast roads

sunburned, tired, heading for the comfort

of our tideless inland home.

(from my second collection, All Blacks’ Kitchen Gardens)

Roll forward twenty years, and I am living in Dunedin. I still can’t swim: Moana Pool has been added to the list of facilities at which I have tried and failed to learn.

And we’re off to the beach for the afternoon, the usual crowd, some of us strong swimmers, some of us not so strong, and me, planning to remain safely on the beach. But the day is — well, not too cold at all by Dunedin standards — and the sea, the Pacific Ocean rolling in to Smaills Beach, is full of enticing little waves. So I wade in, chest deep. As each wave rolls in, I brace myself against it, then wait for the next, my feet resting comfortably on the sandy sea bottom.

Until they’re not. The sea bottom is hummocky, and the last wave, a little more energetic than the rest, has pushed me off the hummock I was standing on and into a pit. It’s not a very deep pit, but it’s deep enough to have my head two feet under the surface of the ocean instead of two feet above it. And I can’t swim.

Why don’t I simply try to walk out of my little hollow sideways? Probably because I panic, and instead of walking, I try jumping. My hand reaches the surface, but not my head. I try for air, but gasp water instead. I jump again. Does my hand even breach the surface this time?

My life doesn’t pass in front of me – only water passes in front of me, green and indifferent. The third time I jump, my feet barely leave the sandy floor. That’s it, then. The sea has won –

And then hands are pulling me out, my friends are dragging me back to shore, where I disgorge large quantities of ocean onto the beach. I lie there, half-dead, half-asleep, slowly recovering. By the time we head back home, I feel much better, good enough to let them buy me an ice cream.

These days, it’s like the whole thing never happened, except that the sea keeps rising up in my writing. I write a story about a man haunted by his own, drowned ghost. It isn’t published. I write another story about a climate scientist, in despair because, like Cassandra, his warnings are never heeded despite how quickly they are coming true: he’s on Smaills’ Beach and at the end of his tether. That one is published as “Going Under” in my second short story collection, Transported.

And it comes out in my poetry too. In “Smaills Beach”, I envisage myself as two people, the one who drowned and the one who did not:

… They drag me out

they pump me full of air

they press me down amid the lupins.

Later, slumped in the back of the car

watching them buy me an ice-cream

I think of my lonely brother

head battered by the rocks, heart

beating in the rhythm of the tide

Smaills Beach, where I split in two:

the traveller, and the one who calls him home.

(from “Smaills Beach” in my first collection, Boat People)

I live in Wellington now, and it’s many years since I went to Smaills Beach, or Rakiura, or Haast. Until they built the new townhouses, you could see a little slice of Wellington Harbour, Te Whanganui-a-Tara, from our deck. I prefer walking in the bush, or among the pines of Town Belt, to walking by the sea, but sometimes I find myself on the beach. The waves pound, pound, pound at the land, snatching sand and gravel and soil from one place to deposit it, days or months later, on some other beach, shaping the land as the land shapes the sea.

When I was a child, I loved to follow the receding waves down the beach, then run back up before the incoming wave could catch me. I stay well above the high tide line now, but the Pacific, the quiet ocean, the patient ocean, is always in the corner of my eye.